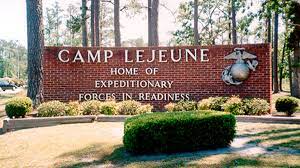 Many people who now live in Wisconsin were once stationed or lived at Camp Lejeune, North Carolina. What those stationed at Camp Lejeune did not know is that they were drinking and bathing in contaminated water that can cause cancer and other serious illness. These victims and their families finally have a pathway for compensation under the Camp LeJeune Justice Act.

Hundreds of victims of Camp Lejeune water contamination previously had their cases dismissed in 2016 because of a North Carolina Statute of Repose. A Statute of Repose is similar to a statute of limitations but its results can be even harsher for victims. This left thousands of military victims and their families without compensation for severe injuries they suffered while living or working at Camp Lejeune.

Congress recently passed the Camp Lejeune Justice Act as part of the Pact Act of 2022. Even before the Act was signed out-of-state marketers with no connection to Wisconsin, began running TV ads in our State. What most people do not know is that many of the Camp Lejeune TV advertisers and internet marketers are not lawyers and do not work for a law firm. They are out-of-state marketing firms. When you contact them they sell your name and information to a law firm that is paying for “leads.” Your name gets sold to the next law firm in line. Usually, these are out-of-state law firms with no connection to Wisconsin. You end up being little more than a number along with hundreds of others whose information was sold as marketing “leads” to out-of-state firms.

At Mingo & Yankala, we treat each client with the personal attention and respect they deserve. We are not looking to represent water contamination victims outside our home State of Wisconsin. If you live in Wisconsin and believe that you or a loved one developed cancer or other serious illness after being exposed to contaminated water at Camp Lejeune between 1953 and 1987, please contact us at 414-273-7400 or through our website. Our consultation is confidential and you are never charged a penny until we win your case. You have nothing to lose by contacting Mingo & Yankala for your free, confidential consultation. It may very well be your first step to significant financial compensation.

What Happened To The Water At Camp Lejeune?

The Marine base at Camp Lejeune North Carolina has been used by our Troops since 1942. It was primarily a Marine base but was used for military training by all branches of the military. 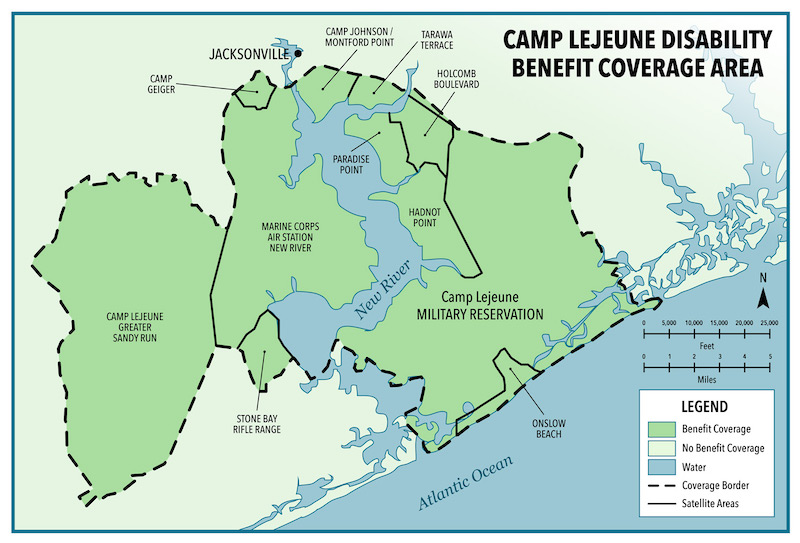 Map Provided by The U.S. Department of Veterans Affairs

The water supply at Camp Lejeune was highly contaminated from the early 1950s through the 1980s. The main source of the water contamination was the disposal of a dry cleaning solvent by an off-base dry cleaner, ABC 1-Hour Cleaners. The contamination leaked into the wells that provided water for drinking and bathing for those who lived on the military base.

Another source of the Camp Lejeune water contamination was a cleaning solvent used by some service members to clean heavy machinery. The solvent is believed to be a carcinogen and was widely used on the base for many years.

What those living on the base and their families did not know was that they were drinking, cooking with, and bathing in what is now believed to be some of the most contaminated water in the United States.

The water contamination at Camp Lejeune was eventually cleaned up and Marine bases across the country have greatly improved their water testing so that this does not happen again. However, this does not help the thousands of military personnel and others who suffered serious illnesses as a result of being exposed to highly contaminated water.

What Health Problems Were Caused By Exposure To Contaminated Water at Camp Lejeune?

Many of our service men and their family members have died from exposure to the toxic chemicals found in the contaminated water at Camp Lejeune.

What Is My Camp Lejeune Water Contamination Case Worth?

The Congressional Budget Office has set aside over $6 billion dollars to settle Camp Lejeune water contamination cases out of Court.

Each case is different and will be judged on its own facts.

Some of the items of compensation include:

If a loved one was exposed to toxic water at Camp Lejeune and has now died, a family member or legal representative may have the right to file a wrongful death claim.

We expect there to be a wide range of recoveries under the Camp Lejeune Justice Act, some less than $100,000 and other recoveries exceeding $1 million dollars. Claims involving certain types of cancer and Parkinson’s Disease are likely to receive the largest recoveries as are claims involving birth defects.

Who Can File A Camp Lejeune Claim?

In those cases where the individual exposed to water at Camp Lejeune is now deceased, their surviving family members or legal representative can file a wrongful death claim.

What Proof Do I Need To Establish In Order To Bring a Camp Lejeune Water Contamination Case?

The Camp Lejeune Justice Act intentionally makes it very easy to bring your claim under the Act.

You will need to establish that you were at Camp Lejeune for at least 30 days between 1953 and 1987. Service members and their families can rely upon their military records to prove they resided at or near the base. Other records including employment records, social security records, or hospital records can be used to establish your exposure to toxic water at Camp Lejeune.

At Mingo & Yankala we will walk you through the claim process every step of the way, including assisting you in locating the proper documents to establish that you were exposed to contaminated water at Camp Lejeune.

How Do I Prove My Cancer, Parkinson’s Disease Or Other Illness Was Caused By Contaminated Water at Camp Lejeune?

The burden of proof required under the Act is referred to as the preponderance of the evidence standard.  This is known as the ordinary burden of proof in Wisconsin.  The purpose of the Act is to help Camp Lejeune victims recover long-overdue compensation.  If we can establish that you were exposed to contaminated water at Camp Lejeune for at least 30 days between 1953 and 1987, and developed cancer or other serious illness, we do not expect the government to aggressively oppose your claim.  To do so would be entirely inconsistent with the underlying purpose of the Act.

There are many scientific studies establishing a link between exposure to contaminated water at Camp Lejeune and different types of cancer, Parkinson’s Disease, and birth defects. At Mingo & Yankala we will closely review your medical records and locate the best scientific studies to support your case.

If I File A Camp Lejeune Claim Will I Have To Go To Court?

The chances are very good that you will never have to step foot inside a courtroom to receive compensation for your Camp Lejeune claim. What is important is that the proper procedure be followed.

The Act requires that we first file a claim (not a lawsuit) for your injuries with the Navy. The government (JAG) then has six months to approve or deny the claim.

At Mingo & Yankala we expect that most claims we file will be resolved during the six-month period following the filing of the claim. This allows victims of Camp Lejeune water contamination to receive their money much sooner than in other types of civil cases.

If your claim cannot be resolved during the six-month period after the claim is filed, we will then take the appropriate steps to file in Federal Court as required by the Act. We expect even those cases that are filed in Court to settle without our clients ever having to step foot in a courtroom.

Is There A Statute Of Limitations For Filing My Camp Lejeune Claim?

Camp Lejeune water contamination cases must be filed within two years from August 10, 2022. In other words, the statute of limitations is two years from the date Act was signed.

There is no reason for individuals diagnosed with cancer, Parkinson’s disease or birth defects following exposure to Camp Lejeune contaminated water to wait for two years. We expect the Department of Defense to begin approving claims shortly, giving contaminated water victims the compensation they deserve. The longer you wait the more you risk missing the deadline for filing a claim.

Will A Claim Be Brought Against My Doctor?

In cases like this, we are often asked by our clients if a claim will be brought against their own doctor. The answer is NO. The claim is strictly against the government using the rules and guidelines set forth by the government itself.

At Mingo & Yankala, S.C. we handle your Camp Lejeune water contamination claim on a contingency fee basis. This means you are guaranteed to never pay a penny until we recover compensation for you. We advance all costs. If we are unable to collect compensation for you under the Camp Lejeune Justice Act, you pay us nothing. We expect all meritorious claims to be honored and fully paid by the government.

Please call us at 414-273-7400 or use our contact page for your free Camp Lejeune consultation. You will find us very easy to talk to. We can speak to you by phone, set up a Zoom conference or meet with you in person.

There is no risk to you in contacting Mingo & Yankala, S.C. to pursue your Camp Lejeune water contamination case because you pay us nothing if we do not win your case. We will walk you through the entire process, handle all filings and keep you up to date on the status of your claim. You will always be treated with respect and never treated like a number being processed along with hundreds of other claims.